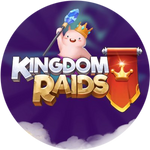 Kingdom Raids is an RPG developed by TAG Labs, a leading gaming studio, which has attracted more than 100 million downloads for their games. The game takes place in a fictional kingdom, “Dood Kingdom”, a land of mystery and adventure.

$KRS is the native governance token of Kingdom Raids with a fixed total supply of 1.000.000.000 tokens. $KRS has the following utilities: