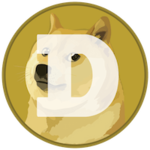 Dogecoin (DOGE) is a peer-to-peer, open-source cryptocurrency. It was founded in 2013 by Jackson Palmer, as a lighthearted attempt to break the stigma of crypto at the time. The project’s name originates from a then-popular meme and has gradually gained traction and popularity. Elon Musk has even suggested the coin is one of his favorites. It now ranks amongst the top 10 cryptocurrencies.

The project has no concrete roadmap or whitepaper, and most developments are focused on security patches and network maintenance. Due to the founders viewing Dogecoin primarily as a fun side project, it is, in essence, a community-led cryptocurrency. The project has carried out many community-based charity events and stunts, for example, in 2014 the project sponsored a NASCAR driver.

What are DOGE key features and how does it work?

The project, like Bitcoin, uses a Proof of Work model for reaching consensus. However, Dogecoin’s algorithm differs slightly. More specifically, it uses the Auxiliary Proof of Work algorithm, which allows miners to mine DOGE simultaneously with other cryptocurrencies. The processes of mining for Litecoin and Dogecoin were merged in 2014 when Litecoin founder, Charlie Lee, reached out to Palmer and suggested this feature be added. As a result, Dogecoin is dependent on Litecoin, as well as the fact the project began as a Litecoin fork.

A further difference is that Scrypt technology is used, this means that miners cannot use SHA-256 Bitcoin mining equipment for mining DOGE.

Dogecoin thus far has mostly been a speculative meme coin. Moreover, it has been used as a tipping system on Reddit and Twitter, where users tip others participating in the Dogecoin community. Alternatively, there are Dogecoin faucets that give users a small amount of DOGE as an introduction to the project and as an incentive to interact with the community. Its potential use cases lie predominantly around its capacity as a spending currency.

How to mine Dogecoin?

The total supply of Dogecoin is uncapped, which means its circulating supply will continue to increase as new coins are created through mining. At the moment, new blocks are discovered roughly once every minute on the network. Where Bitcoin uses the SHA-256 hashing algorithm, Scrypt is used for mining Dogecoin, and as previously mentioned, miners can mine both Litecoin and Dogecoin at the same time since the processes were merged.

There are three main ways to mine dogecoin: individual mining, mining pools, and cloud mining.

Individual mining for Dogecoin can be done by using a CPU or GPU and software such as EasyMiner, for example. It can be difficult if you do not have top-spec equipment, it can also cost a lot in electricity bills. This is why crypto enthusiasts looking to make a profit from mining Dogecoin might prefer to join mining pools. Mining pools offer a higher chance of becoming a block validator due to the collective power of the pool, however, they often come with a fee to join the pool and have various formulas for calculating payout to its members.

Cloud mining is another way to earn Dogecoin. This method is popular as it does not require any specialist equipment, only a dogecoin wallet. Essentially, cloud mining means renting computing power from a data center, by paying a monthly or annual fee. The coin, in this instance DOGE, is then mined via a mining pool at that center, and then shared with you according to how much computing power you have paid for. Some popular cloud mining pools are Genesis Mining and Nicehash.

Where can you buy DOGE?

DOGE is available to buy on any of the CEXs and DEXs listed on the market tap. Popular choices include Binance, OKEx, and KuCoin.

Dogecoin's current share of the entire cryptocurrency market is 0.81%, with a market capitalization of $ 8.05 Billions.

You can find more details about Dogecoin on its official website and on the block explorer.