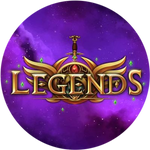 Legends is an open-world exploratory, action, strategic, intellectual and enigmatic game and collector of NFT cards that has been built on binance chain and will be published on personal computers and Mac and mobile phones (ios and android) until 2025. Game has been made for entertainment and obtaining income in legendary adventure which is rich in graphic, new technologies and excitement.

Legends governance token is given by developers to FWCL holders for the purpose of making decisions that will dictate a protocol's future. Coin holders have a say in decisions about new feature proposals and changes to the project's governance system.

Legends's current share of the entire cryptocurrency market is 0.00%, with a market capitalization of $ 312.88 Thousands.