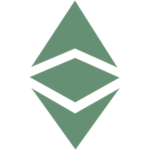 A decentralized platform that runs smart contracts, created in 2016, when Ethereum underwent a ‘hard fork’.
Website

Ethereum Classic (ETC) is a decentralized, open-source blockchain platform, as well as a cryptocurrency. It is smart contract compatible and allows developers to build dApps on its network.

It was created in 2016, due to a difference in ideological and technical opinion within the Ethereum community, which came as a result of the infamous DAO attack. The original Ethereum blockchain was split into two with Ethereum Classic being the original and Ethereum being the newer blockchain.

The DAO attack on Ethereum Classic happened in June 2016. Hackers stole $50 million worth of funds and a split was performed as a way to return the stolen funds to their original owners. This resulted in a fork leading to the two versions co-existing. The newer network, or Ethereum, uses ETH or ether as its cryptocurrency while the older one, renamed Ethereum Classic, uses ETC.

What are ETC key features and how does it work?

Ethereum Classic and Ethereum remain similar in terms of their basic functionalities. For example, developers can make use of the open-source code to develop and run decentralized applications and ERC-20 tokens can also be created for use on such applications.

However, Ethereum Classic differs significantly as it is incompatible with any ETH update. It cannot access any upgrade or change on the being implemented on Ethereum. This is because the two split as a result of a hard fork, and, by definition, a hard fork is a backward-incompatible update. Since a new set of rules is implemented meaning that the new chain, and its users (nodes), are, in effect, cut off from the original chain.

As such, Ethereum Classic’s existence can be considered in part ideological, and as in way as a historical record of the Ethereum network.

What can Ethereum Classic be used for?

The network faces issues with security, in part from its previous history and associated reputation. As such, these concerns over security could potentially prevent developers from deploying smart contracts via Ethereum Classic in major financial and real estate transactions or projects.

Another main concern of Ethereum Classic lies with its drawbacks in terms of scalability. On average, the network can manage 15 transactions per second, far less than centralized payment networks, such as Visa, or even other decentralized blockchain networks. Although Ethereum Classic has had software upgrades, its payment system scalability remains to be one of its most challenging struggles going forward, thus, its use cases remain limited.

Essentially, ETC can be used by Ethereum Classic users to pay the gas price for conducting transactions on the network.

Where can you buy ETC?

Ethereum Classic can be bought on the most popular CEXs and DEXs as listed here.

Ethereum Classic's current share of the entire cryptocurrency market is 0.28%, with a market capitalization of $ 3.07 Billions.

You can find more details about Ethereum Classic on its official website and on the block explorer.