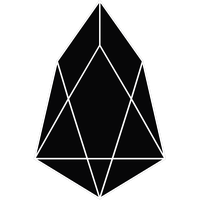 A blockchain infrastructure for the development of decentralized applications

The maximum supply of EOS that will ever be issued is 1.02 Billion coins, and the current supply of EOS in circulation is 982.27 Millions coins.

EOS (EOS) operates on its own blockchain.

EOS's current share of the entire cryptocurrency market is 0.12%, with a market capitalization of $ 2.18 Billions.

You can find more details about EOS on its official website and on the block explorer.

EOS price Index provides the latest EOS price in US Dollars , BTC and ETH using an average from the world's leading crypto exchanges.

The EOS to USD chart is designed for users to instantly see the changes that occur on the market and predicts what will come next.

EOS is designed to facilitate the operation of decentralized applications (dApps).  The platform aims to solve current issues experienced running dApps on blockchains, particularly scalability. The platform attempts to solve these issues by creating an operating system-like construct upon which applications can be built. The software can facilitate accounts, authentication, databases, asynchronous communication, and the scheduling of applications across many CPU cores.

What are EOS key features and how does it work?

Fundamentally, the EOS blockchain is designed to recreate the performance of a real computer. As such, its software makes use of relatively familiar computing concepts in its operations.

The three main resources that are needed to run dApps on the network are:

Given that EOS is needed to purchase these three resources, developers must buy EOS to run their applications.

However, dapps built on EOSIO don’t require users to pay for transactions, making EOS free to transfer for dapp users. Instead, these costs are passed on to Dapp developers who must pay for network resources. Information about emissions noteworthy here (~5% inflation i suppose) + that there is no max supply.

To secure its blockchain, EOSIO uses a delegated proof-of-stake (DPoS) consensus mechanism. DPoS uses a real-time voting and reputation system to decide who can create the next block. This means anyone who owns EOS can help operate the network, however, the more tokens owned, the more chance of being chosen to perform duties.

Better to mention the number of validators. (21 mb?) So the speed and free transactions in general come from big centralization.  Each EOS token can be staked and represents one vote in governance votes on the platform.

What is noteworthy about EOS.IO?

EOSIO takes a more active and unique approach to network governance, for example, users have the right to vote and carry out decisions to alter the software’s rules. Simply owning EOS gives a user the ability to vote on decisions, and block producers are responsible for carrying out approved decisions.

Where can you buy EOS.IO?

EOS can be bought at the CEXs and DEXs as listed here.