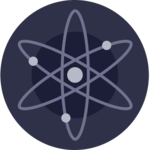 [ATOM]
BNBEthereumPolygonCronos
Cosmos is an ecosystem of blockchains that can scale and interoperate with each other.

Cosmos price Index provides the latest ATOM price in US Dollars , BTC and ETH using an average from the world's leading crypto exchanges.

The Cosmos to USD chart is designed for users to instantly see the changes that occur on the market and predicts what will come next.

Cosmos's current share of the entire cryptocurrency market is 0.28%, with a market capitalization of $ 3.38 Billions.

You can find more details about Cosmos on its official website and on the block explorer.

The self-described “Internet of Blockchains”, Cosmos, is an ecosystem that enables different blockchains to communicate together. It focuses on interoperability, speed, and scalability. At its core, it is a network made up of multiple blockchains, each powered by its consensus algorithm and interconnected via the Cosmos network.

The ATOM token is used for securing the network as part of its Proof-of-Stake consensus.

What are ATOM key features and how does it work?

In general, Cosmos can be explained in the terms of the “layers of blockchain” - layer of consensus, network layer and application layer. In cosmos these first 2 layers are combined into Tendermint BFT, so applications can be easily created as they serve as an “extension” and there is no need for developers to put themselves into strict rules of first 2 layers. Applications interact with the first 2 layers via ABCI ( Application Blockchain Interface).

The Cosmos Hub lies at the center of the network. It is a ledger that records the history of the entire network, that is, actions carried out between all of the different interconnected parts of the Cosmos ecosystem. For example, if two blockchains share a particular transaction, this will be recorded in the Hub as well as on the two separate blockchains.

The Cosmos blockchain communication protocol, IBC (Inter Blockchain Communication), is integral to the network’s operations. This protocol provides a standard connector that makes it easy for blockchains within Cosmos to communicate and share information. It also keeps a complete record of messages within the Hub. This method of recording events also means that it is very difficult to deny that a transaction has happened. Blockchains created within the Cosmos Hub that is connected via IBC are called “zones”.

The network uses Tendermint Core, in essence, an open-source developers’ tool that can be customized to create many different types of applications. It combines the networking and consensus layers of blockchain infrastructure into one and allows teams to build blockchains with more ease, without the need to code them from zero.

Tendermint uses a Proof-of-Stake protocol, this enables the network to be interoperable, and also offers instant finality, thousands of transactions per second, and increased security. It is designed to be BFT SMR (State Machine Replication). In essence, this means that ​​Tendermint Core uses a special machine that copies servers and distributes them throughout the global Cosmos network, secures the network, validates transactions, and commits blocks to the blockchain.

ATOM is Cosmos Hub’s governance token and plays a role in the network’s Proof-of-Stake. It is used to ensure the network of computers running Cosmos Hub remains in sync. There are a limited number of 100 validators who carry out the process of generation and validation of blocks within the network. Any user can delegate their tokens to validators and receive a reward in return, but only holders of the highest amounts of ATOM are entitled to be validators.

What can Cosmos be used for?

Cosmos is used by decentralized platform developers who seek an environment that offers customization without any associated high fees.

The Cosmos team aims to offer advancements in four directions: scalability; compatibility; user experience; sovereignty. The latter means that there are no specific requirements for developers using the Cosmos SDK. Thus, Cosmos provides a set of adaptable tools with which developers can deploy and use to build applications. However, since NFTs are currently unsupported, use cases are centered around DeFi.

Where can you buy ATOM?

Cosmos (ATOM) can be bought on the DEXs and CEXs as listed on the market tab. Binance, OKEx, and CoinBase Pro are some of the most popular choices.