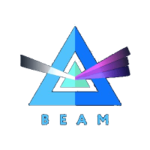 BEAM price Index provides the latest BEAM price in US Dollars , BTC and ETH using an average from the world's leading crypto exchanges.

The BEAM to USD chart is designed for users to instantly see the changes that occur on the market and predicts what will come next.

BEAM (BEAM) operates on its own blockchain.

BEAM's current share of the entire cryptocurrency market is 0.00%, with a market capitalization of $ 22.02 Million.

You can find more details about BEAM on its official website and on the block explorer.

BEAM is a decentralized blockchain-based project that operates as a confidential cryptocurrency. Beam was founded in March 2018 and the first version of the Beam blockchain was launched in January 2019.

BEAM was created with the aim of solving the issue of lack of confidentiality across existing blockchain networks. For example, transactions on Bitcoin are recorded publicly and can be accessed by anyone via its public ledger. As such, the project hopes to provide high levels of privacy whilst retaining usability.

BEAM is the network’s native cryptocurrency. It has a deflationary token economic mechanism which includes halving every four years. BEAM total supply is 262,800,000. The token is secured with a Proof-of-Work consensus algorithm known as BeamHash III. It can be mined with GPUs.

BEAMX, the platform’s second cryptocurrency, is capped at 100,000,000 and is used for participation in the BeamX DAO.

What are BEAM’s key features and how does it work?

BEAM has developed technology that allows the platform to offer tools for increased privacy. This includes the Beam Wallet. The wallet is available on Windows, Mac, and Linux, as well as on mobile via Google Play and the App Store.

Beam wallets facilitate Private Transactions meaning that no one besides the sender and receiver can see the value of the transaction, nor any addresses.

Additionally, holders of BEAM can swap their tokens via the Beam Atomic Swap functionality. This means users do not have to rely on a third-party exchange or other intermediaries.

Furthermore, Confidential Assets can be created directly via the Beam blockchain. Assets are confidential by default since they are integrated with Beam’s technology Also worth addressing is the fact that Beam uses the Miblewimble protocol in order to support faster transaction speeds.

The BeamX platform is used by developers to create smart contracts or Beam Shaders. Developers can create decentralized applications with Beam Shaders, applications can be easily integrated with the use of APIs.

Where can you buy BEAM?

BEAM is available for trading on the following CEXs and DEXs listed here. The most popular platforms with the highest liquidity are Binance, Gate.io, and CoinEx. The price of BEAM will vary depending on the choice of exchange and overall market conditions. For up-to-date and historic data for BEAM market prices, please view the price charts on this page.