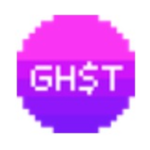 Aavegotchi is a DeFi-staked Crypto Collectibles.

GHST is a native utility token of the Aavegotchi ecosystem. The latter consists of a crypto collectible game where the players stake non-fungible token (NFT) avatars, named Aavegotchis (plural for Aavegotchi, a reference to the word “Tamagotchi'', while “Aave'' is the protocol that the system uses). They exist on the Ethereum blockchain as ERC-721 tokens, operating within the open-source Aave protocol. The platform utilizes the Proof of Stake consensus mechanism. The ERC-721 standard is also used in various crypto collectible games, such as CryptoKitties. Aavegotchi value depends on various factors and can be increased using multiple ways with the most common being Rarity Farming which includes several in-game activities and mini-games.

The project was founded by Pixelcraft Studios in 2020. The experts of the company have significant experience working in the worlds of decentralized finances, NFTs and crypto games. The entity (legally named Pixelcraft Studios Pte. Ltd.) is based in Singapore. Its CEO, Jesse Johnson, also developed the Bullionix platform, the first NFT to be backed by gold. Many members of the team are operating under pseudonyms, including a co-founder who goes by Coder Dan nickname.

What are GHST’s key features and how does it work?

Aavegotchi platform is more than just a game or the NFT marketplace. For example, each Aavegotchi is connected to an escrow contract address that holds Aave-backed ERC20 collateral. Depositing other tokens into the system to interact with Aavegotchis gives them value. Aside from interest, the rewards can be earned.

While the Aavegotchis exist as NFTs on the Ethereum blockchain, the GHST token operates within the Polygon sidechain, although several bridging solutions exist. GHST acts as in-game currency and can be utilized for a variety of purposes:

The platform’s value is derived from its technical capabilities, the tech it uses and its practical purposes. By combining the successful elements of blockchain-based games and DeFi protocols, the Aavegotchi provides wide use cases and a lot of value.

There’s a functional in-game market where one can buy and sell Aavegotchis, as well as in-game items, products and NFTs.

The GHST token is used for all of these operations. Staking GHST will earn a user the FRENS in-game points. It can be used only for buying in-game items. GHST tokens can be earned by in-game activities, as well as voting and interacting at the AavegotchiDAO.

The Aavegotchi as NFTs is secured by the Ethereum blockchain, while various advantages of the Polygon sidechain are used by the GHST tokens, making it a more powerful multi-purpose solution within the platform. Lower transaction fees and better scalability ensured the usage of Polygon over Ethereum for GHST. Polygon offers sufficient levels of decentralization and its current capabilities are enough for the platform’s future ambitions, while Ethereum 2.0 limitations can slow down the growth of Aavegotchi platform.

The users need to use a bridge to transfer the tokens between the blockchains. There is an official Aavegotchi Bridge available, as well as various third-party decentralized solutions being offered.

A percentage of GHST revenue goes to developers and will be invested back into the platform, being mainly used for promotional activities, such as marketing and giveaways.

Where can you buy GHST?

Aavegotchi tokens (GHST) are available to buy on several platforms, including Binance, OKX, MEXC, Kucoin and Quickswap. They can be traded against stablecoins (USDT) and ETH cryptocurrency.

How can you store GHST?

MetaMask is the most common and obvious solution for storing GHST since the users need to bridge ETH, MATIC and GHST anyway, and this wallet offers such functionality.

While GHST tokens are not minable, there are staking solutions available, with the rewards being paid in the in-game FRENS currency (FRENS are not tokens, it’s similar to an in-game balance, they are not transferable either).

Aavegotchi's current share of the entire cryptocurrency market is 0.00%, with a market capitalization of $ 42.04 Million.

You can find more details about Aavegotchi on its official website and on the block explorer.