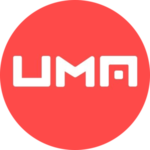 The UMA protocol allows its users to create collateralized synthetic tokens for tracking the price of nearly anything. These contracts are designed to be self-enforced and self-executed. No exposure to the token itself is needed and everything can be traded as ERC-20 tokens. This solution makes derivatives (financial contracts that derive their performance from another underlying entity; for example, futures) more accessible, as well as open new possibilities to the world of DeFi (Decentralized Finances).

The main difference between synthetic tokens and real-life derivatives is that the former mainly tokenizes the relationship instead of being directly connected to the asset itself.

Synthetic tokens require 3 elements to function: a price identifier, (unless it’s a perpetual contract) and a collateralization requirement. UMA smart contract (Token Facility) is used for setting the elements mentioned above. Economic guarantees are ensured through the Data Verification Mechanism or DVM that is designed to be incredibly secure. The UMA token itself is used for governance within the protocol, it grants the token holder the ability to vote on decisions. The DVM can be called to dispute a collateral liquidation claim. These contracts are called 'priceless financial contracts' within the UMA protocol.

Where Can You Buy UMA?

UMA tokens are available to buy on various platforms. The list includes Binance, OKEx, Huobi Global, Bybit, and HitBTC. They can be traded against stablecoins (USDT), cryptocurrencies like ETH and sometimes against FIAT.

Where Can You Store UMA?

UMA is an ERC-20 based token operating over the Ethereum blockchain. Any wallet with ERC-20 compatibility can be easily used for storing UMA. Examples include Trezor, Ledger (a very popular hardware wallet solution), Exodus and many others.

Mining and Staking of UMA

UMA tokens are not minable and their quantity is limited (the total supply is a bit more than 100 million) but this could be set to change since liquidity mining experiments using UMA have been done. As an example, there's a program named ‘Developer Mining’ which rewards users for the integration of certain financial contracts.

UMA is an inflationary token. It can be staked for governance purposes and for receiving some rewards for minting various tokens.

UMA's current share of the entire cryptocurrency market is 0.01%, with a market capitalization of $ 151.13 Million.

You can find more details about UMA on its official website and on the block explorer.