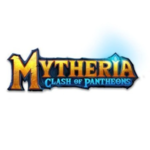 Mytheria is a world where Gods from different cultures combat for honor and glory. A war takes place that shakes the entire universe, causing Gods of different civilizations and heroes to clash with each other. In such a world full of chaos, where Zeus can shake hands with Odin, Heracles side by side with Thor, Wukong engages Ares on the battlefield, anything can happen. You have the power to build alliances between gods and heroes to form an invincible squad and create new Gods with unimaginable powers.

The game has no barrier to entry, there's nothing to stop players and their friends from joining and playing the game. Players own their cards which are secured on the blockchain. The game also provides possibility to collect rare cards, build own deck and trade it on the market with community members.

The $MYRA token is a utility token of Mytheria that provides following features: