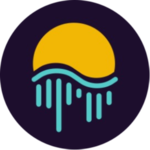 The Utility Token of the Moonriver Network

Supply and other token economic behaviors on Moonriver will be the same as Moonbeam, but token distribution will be different in order to support the unique goals and attributes of the network. Moonriver will serve as a “CanaryNet” for Moonbeam, but it will also be a community-led experiment where the community will decide the direction it takes. Among other things, Moonriver used a large parachain crowdloan to obtain its initial parachain slot on Kusama.

Runs as a parachain connected to the Kusama relay chain

Has an active set of 40 collators

There are two RPC endpoints (hosted by PureStake). People can run full nodes to access their own private RPC endpoints

Over the course of the 5-phase Moonriver launch, the network will progressively be updated to a fully decentralized Proof of Stake network. For a breakdown of what will occur during each phase, check out the Network Launch Status page.

Moonriver (MOVR) operates on its own blockchain.

Moonriver's current share of the entire cryptocurrency market is 0.01%, with a market capitalization of $ 49.84 Million.

You can find more details about Moonriver on its official website and on the block explorer.