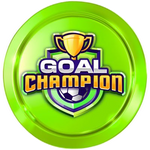 Goal Champion is an organization creates rewards-based crowdfunding campaigns for sporting events, such as World Cup.

Goal Champion launched the campaign with the first product: World Cup Champion Pool Campaign. Everyone donates to this campaign, which incentivizes prediction of the winning team in The World Cup, has an opportunity to generate winning tokens by voting and predicting the winning team in addition to rewarding prizes from contributions from other backers and the donations generated from Sports Games businesses operating both within Malta and internationally.