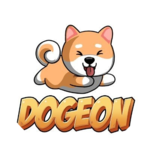 Dogeon is a Gaming NFT project on Avalanche.
Website

Dogeon is is the first Play-to-Earn game, a project that brings joys and income to anyone out there. The project has been nested since early 2021. After lots of brainstorming and idea gathering, the team decided to bring Dogeon to life and started the first line of code in March 2021. Dogeon is a Play-to-earn Dog Breeding and Racing NFT game built on Avalanche, the fastest smart contracts platform in the blockchain industry.

1) Buy the dog card from Marketplace (1 male and 2 female card);

2) Open the game to combine these two cards to create new NFT dog;

3) Buy stables for your dogs to stay;

4) Feed, equip items, and train your dogs to unlock skills to use in the race;

6) Get rewards if your dog finishes in top 3.

There are many types of tasks for players to earn rewards, such as daily quests and achievements. A new daily quest is granted to each player every day.

Dogeon's current share of the entire cryptocurrency market is 0.00%, with a market capitalization of $ 12.69 Thousands.