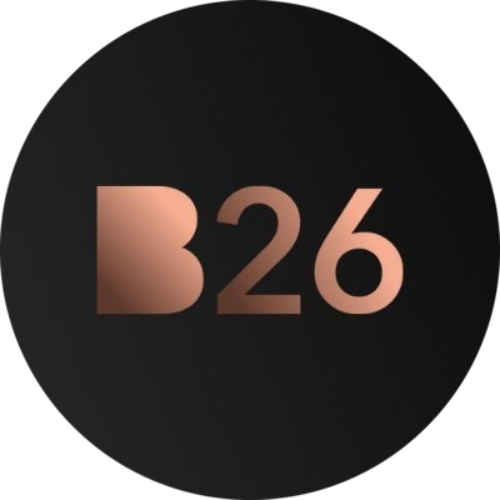 B26 is the first private self-banking services powered by blockchain technology and based on a new kind of DeFi experience.

B26 (B26) is a cryptocurrency token generated on the Ethereum blockchain.

B26's share of the entire cryptocurrency market is 0.00% with the market capitalization of $ 1.30 Million.

Find more details about B26 cryptocurrency at the official website and on the block explorer.

B26 price Index provides the latest B26 price in US Dollars , BTC and ETH using an average from the world's leading crypto exchanges.

The B26 to USD chart is designed for users to instantly see the changes that occur on the market and predicts what will come next.

Cryptorank
CryptoRank provides crowdsourced and professionally curated research, analysis and market-moving news to help market participants make more informed trading decisions. Whether you’re looking for the set of highly practical and insightful market information, market data or analytics, we have the tools to address your business needs.
©CryptoRank, LLC 2017-2020 | All trademarks and copyrights are the property of their respective owners
Terms and Conditions | Privacy Policy | Sitemap
RISK DISCLAIMER: The information contained on this website is not investment advice. Trading financial instruments carry a high level of risk and one for which we strongly advise you to consult with your registered investor advisor.