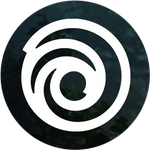 Ubisoft is a publishing and distribution company of interactive entertainment products worldwide.

Ubisoft was established in 1986 by Yves Guillemot and his brothers. It is headquartered in Surrey.